Vaping is twice as effective as patches and gum! 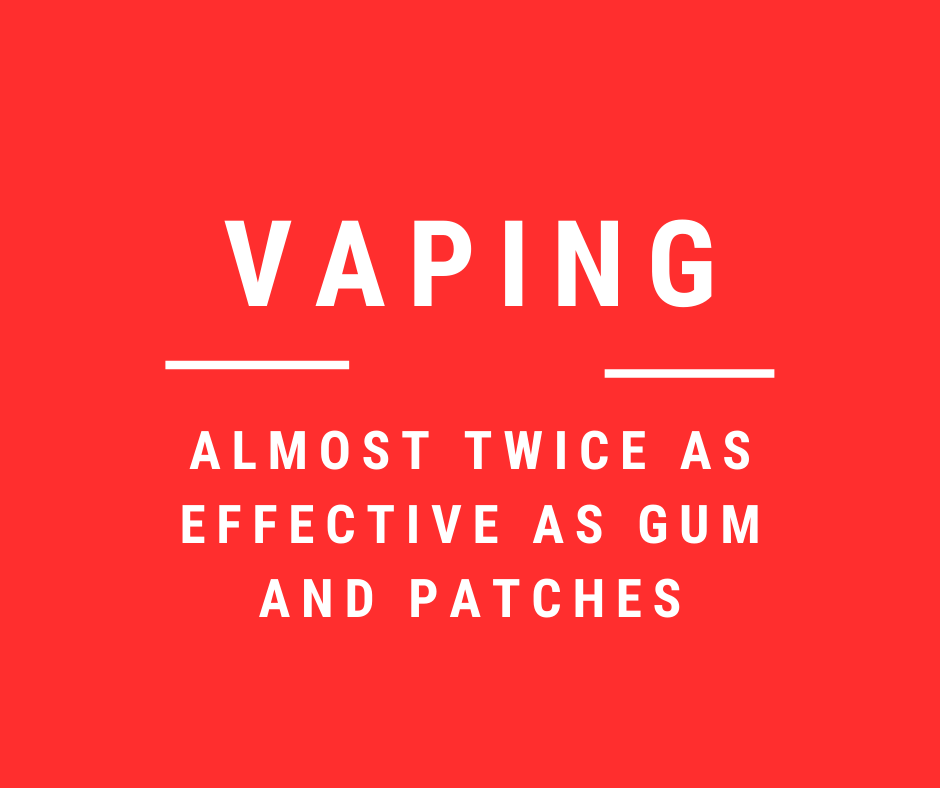 A study by the researchers at Queen Mary University of London, funded by the National Institute for Health Research and Cancer Research UK, has concluded that vaping may be up to twice as effective than nicotine replacement therapy as helping smokers quit the habit.

They led a trial of just under 900 participants who were already using the UK NHS’s stop smoking services who were assigned to either an NRT product of their choice, including a combination of these treatments, or they were given an e-cigarette starter pack. The starter pack they were given contained a refillable e-cigarette with one bottle of e-liquid containing nicotine, with a recommendation to purchase more e-liquids in the flavour and strength that they wanted. Both of these treatment groups also received weekly behavioural support for at least four weeks.

In addition to e-cigarettes being almost twice as effective, the researchers found that:

After one year, 18.0% of participants who received the e-cigarette package had stopped smoking, compared with 9.9% in the group given the nicotine replacement therapy products. One possible reason for this given is that e-cigarettes could be more effective for smoking cessation because they allow the users to customise the nicotine dose to their own needs.

Lead researcher Professor Peter Hajek, Director of the Health and Lifestyle Research Unit at Queen Mary’s Wolfson Institute of Preventive Medicine, said: “This is the first trial to test the efficacy of modern e-cigarettes in helping smokers quit. E-cigarettes were almost twice as effective as the ’gold standard’ combination of nicotine replacement products.

Although a large number of smokers report that they have quit smoking successfully with the help of e-cigarettes, health professionals have been reluctant to recommend their use because of the lack of clear evidence from randomised controlled trials. This is now likely to change.”

The only previous trial comparing e-cigarettes to nicotine patches used early ‘cig-a-like’ e-cigarettes with very low nicotine delivery, had no face-to-face contact, and found low efficacies for both treatments.

The researchers found that, after one year, 18.0% of participants in the e-cigarette group had stopped smoking, compared with 9.9% in the NRT group (relative risk 1.83; 95% confidence interval 1.30–2.58; P<0.001). Furthermore, among those who had successfully quit smoking for one year, those in the e-cigarette group were significantly more likely to use their assigned product at 52 weeks (80%) than those in the NRT group (9%).

The treatment groups were also asked to record their side effects during the study. Throat or mouth irritation was reported more frequently in the e-cigarette group and nausea was reported more often in the NRT group, but all of the effects were mostly mild.

The researchers said that the trial provided some indication of why e-cigarettes had better results than NRT; namely, that “e-cigarettes were more effective in alleviating tobacco withdrawal symptoms and may have allowed better tailoring of nicotine dose to individual needs.”

They said the findings were likely to be valid for dependent smokers seeking help, but may not apply to smokers who are less dependent or who try e-cigarettes for reasons other than quitting smoking. Hywel Williams, director of the NIHR health technology assessment programme, described the study as “groundbreaking”.

“Cigarette smoking is still a major cause of ill health and death in the UK, so this study will provide much needed evidence to help people and policymakers to make informed choices,” he said.

Martin Dockrell, tobacco control lead at Public Health England, said: “All stop-smoking services should welcome smokers who want to quit with the help of an e-cigarette.”

Sophia Lowes, from Cancer Research UK, said: “This is the first study to show the effectiveness of e-cigarettes combined with behavioural support for giving up smoking, and the results are extremely positive. This research should give doctors, nurses, pharmacists and Stop Smoking Service advisers further confidence to recommend e-cigarettes as an effective means of quitting.

“Smokers have a range of options available to help them quit, including nicotine replacement therapy, prescription medication or e-cigarettes. Everyone is different, so smokers shouldn’t be afraid to experiment and find what works for them. But whatever the method, it’s clear that using the support available from local Stop Smoking Services gives smokers the best chance of quitting.”

If you’re ready to get off the smoking bandwagon and regain your health as well as save money, you can read more about how you can quit with the help of e-cigarettes here. If you need more information about how stopping smoking can improve your health, we have an article that tells you at various time points how your body is benefiting from being smoke free here.

If you’re ready to start, and you want to start browsing out products, please take a look at our store here. You can read about which e-cigarette is best for you here.

The Effects of Quitting Smoking

Get all the latest news & discounts directly to your inbox.

Subscribe to our newsletter for discounts and latest releases.