What Ratio of VG/PG do I need? 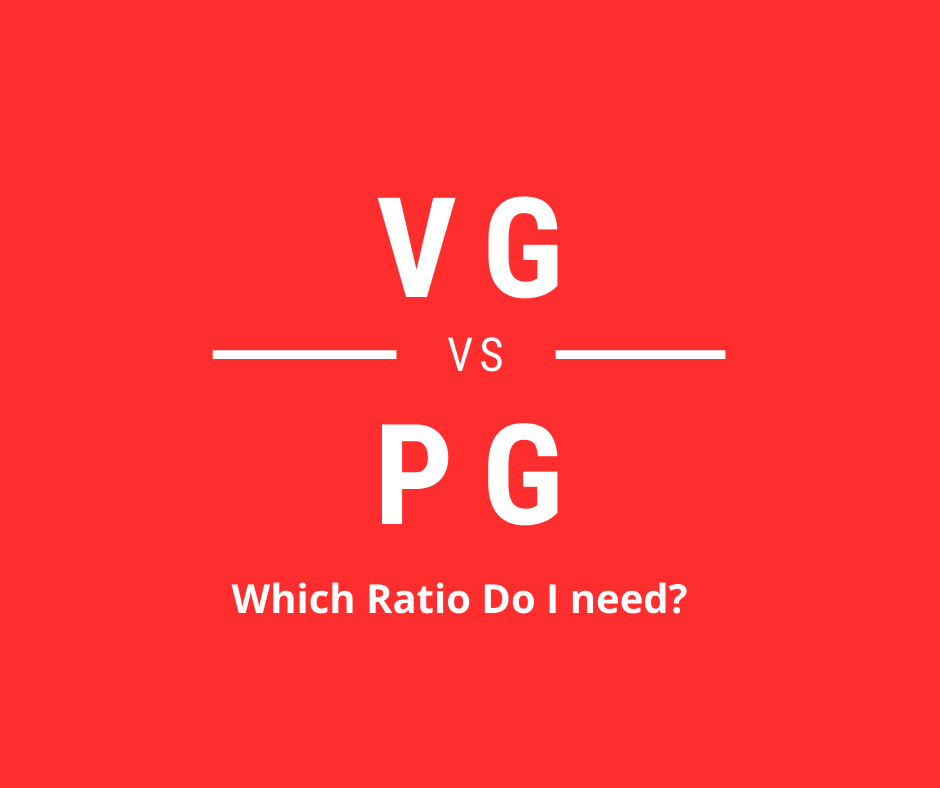 When it comes to vaping, and specifically vape juice, two terms constantly come up, and that’s VG and PG. They’re most of the ingredients in vape juice if we’re talking physical amounts, and they’re what actually make the vapour. Still, many people new to vaping as well as those that are established vapers don’t know much about them. Knowledge of these two ingredients can vastly improve your vaping experience, and we’ll explain how.

So what are they?

Vegetable Glycerin and Propylene Glycol are odorless liquids that are combined with both flavourings and usually nicotine to create vape juice. They both technically belong to the alcohol chemical class, but rest assured that they aren’t intoxicating chemicals. They’re deemed as sugar alcohols and they’re actually included in many consumable products you might not have even realised.

They’re not oils, and as such they don’t carry the medical issues that inhaling oils causes, such as lipoid pneumonia. The two fluids have a different consistency to each other and a slightly different taste and by changing the mixes into different ratios, they create different thicknesses of vape juice suited to different equipment. Some setups for example can only work with specific ratios, such as 50/50 for the smaller devices, so it’s important to make sure you’re choosing the right mixture for what you’re using to vape with.

Let’s have a deeper look into these two components of vape juice, and hopefully limit some worries you have.

Propylene Glycol is a by-product of the petroleum process, it has no odor or colour and it’s thinner that VG. In vape juice it’s the part that provides you with the ‘throat hit’, which some users say is a similar sensation to when you smoke tobacco. It’s also more effective at carrying flavour than VG is which makes it more commonly used as a suspension fluid for flavour concentrations and nicotine.

It’s present in many household items, such as baby wipes, toothpaste, medical products, pet food, shampoo and beauty products. So is it safe? Studies conducted have concluded that PG is safe to ingest orally and the FDA has labelled it “generally recognised as safe” as a food additive. However, most studies into the safety of PG look at it through ingestion, and not as being inhaled as an aerosol. That said, there are a few studies which looked into inhaling PG, one of which was a long term study held in 1947 which concluded that inhaling PG was ‘completely harmless’.

There was, however a 2010 study that looked at PGEs, which are a mixture of propylene glycol and glycol ethers, suggested that there was an increased risk of developing respiratory and immune disorders in children such as asthma, hay fever and eczema. That said, it was concluded that glycol ethers, and not propylene glycol, were the most likely cause for this. Looking at the evidence, it’s reasonable to assume that PG is safe to be inhaled, however more comprehensive studies are needed to confirm this.

There’s several scaremongering stories from the misinformed, including a claim that PG is a toxic substance used in antifreeze. Those claimants would do well to research further, as there are two types of anti-freeze – toxic and non-toxic. The toxic antifreeze uses a substance referred to as ethylene glycol, which is certainly dangerous, however is not used in vaping. PG-based antifreeze does exist, and is used in food processing machinery where the toxic antifreeze could cause issues. While PG is regarded as safe for humans and generally regarded as safe being a food additive for dogs, it has been linked to Heinz Body Anemia in cats, so be careful vaping around cats if you use a PG based vape juice.

Some users find that a high level of PG can irritate their throats. Actual allergies to PG are fairly rare, but if you find yourself suffering from a rash or other unpleasant reactions after using PG vape juice, you may have a mild sensitivity – just go for a higher VG mix of juice instead. The most common side effects for PG are dehydration and dry mouth. It’s advisable that once you start vaping with PG mixes, just drink more liquids to combat this until your body gets used to it. Often, side effects of quitting smoking are confused as PG side effects, so that should be taken into consideration too.

Now on to VG, or Vegetable Glycerin, and as the name suggests, it comes from vegetable oils and is safe for vegetarians. It’s commonly used in vape juice to thicken it up and give a thicker feel to the vapor. It has a slightly sweet taste and is much thicker than PG. It provides a smoother throat hit and as such, it’s more suited to sub-ohm vaping. While most nicotine and flavourings are suspended in PG, some vendors are now using VG instead, to be able to offer 100% VG mixes for smooth vaping and big clouds!

As with PG, you can find vegetable glycerin in numerous medical, foor and personal care items. It’s used as a sugar replacement, in bubble bath, aftershave and deodorant. It’s also used in pet food, soap, hand cream and is also used in food such as baked goods, to increase the moisture.

The FDA has classified VG as being generally recognized as safe, and it’s actually widely regarded as one of the most benign substances known to man. Assessments on it show that is has low toxicity when consumed, and has low potential to irritate the skin or eyes. This, in addition to the widespread use within food and medicine suggest that VG is safe for humans. However, as with PG, there are limited studies looking into if VG being inhaled is as benign as when ingested.

A 2008 study of the toxicity of inhaling aerosolized glycerol found minimal risks. We can assume the use of VG in vaping has no serious impact on health but, as with PG, we would welcome more detailed studies.

The risk of vegetable glycerin allergies is very low, making it a useful alternative if you experience issues vaping PG vape juice. However there are a fraction of users who experience allergies with VG, the risk is low but if you have an allergy to palm oil or coconut oil then you may also have issues vaping with VG. Diabetics could also possibly experience problems metabolizing VG, but this wouldn’t be an issue at the levels used in vaping.

Are there any issues vaping with VG?

The increased thickness of VG means that your coils will burn out quicker than with PG based juices. They’ll clog coils more quickly due to the thickness of it and in certain tanks with limited flow to the coils, it may not work well. As with PG, the most common side effects of vaping VG are dehydration and dry mouth, again be sure to drink more fluids when you start vaping.

So what ratio should I be using?

There isn’t really a one-size-fits-all answer to this and it’s down to the kind of vaping experience you’re after.

If you’re after a throat hit when you’ll prefer a high PG juice. That kick at the back of the throat is something that ex-smokers often crave, so you’ll find this by using a juice with high PG and nicotine. The flavour will be slightly better too, as PG carries flavour a little better than VG.

If you’re looking for smoothness, then VG is the way to go. You’ll also feel a more substantial mouthfeel with the thicker vapor too. The flavour is slightly muted compared to PG mixes but you can combat this by upping the power to produce more vapor. Stay within the limits of your coil though, or you risk dry hits and burning the coil.

If you’re wanting to vape stealthily, then go for a high PG mix, as less vapor is produced than with VG. It’s important to use common sense to stealth vaping though – keep vaping out of public transport and waiting rooms. It’s bad manners and often still illegal.

If you’re all about the cloud and you’re wanting a juice that’ll fog a room in minutes then you should be opting for a full VG mix, the higher the percentage the better.

Another thing to note is the equipment you’re using. If you’re building the coils yourself and don’t fill the coil with enough cotton, you’re likely to spill a high PG mix all over as it’s a lot thinner. Also be aware that devices towards the beginner side of the vaping scale work best with a 50/50 mix.

In conclusion, the basics of VG and PG are easy to grasp. If you’re new to vaping we’d recommend starting with a 50/50 mix, however your local vape shop can direct you to a suitable juice ratio for your equipment!  If you already know what ratio you’d like and you’re ready to buy juice, you can see what juices we stock here. You can also check out the vapes we stock here. Happy Vaping!

The Effects of Quitting Smoking

Vaping is twice as effective as patches and gum!

Get all the latest news & discounts directly to your inbox.

Subscribe to our newsletter for discounts and latest releases.